Welcome to the Fifth Class page!

We chose Maebh McConnell’s modern take of the Mona Lisa (picture on the left) as Artist of the Week. 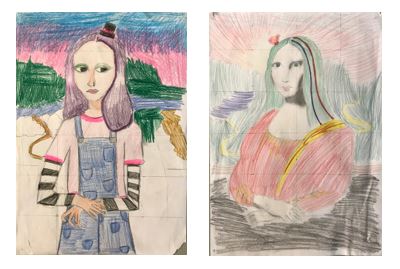 Ben Fromholz’s Last Supper (picture on the bottom) was also selected as Artist of the Week. 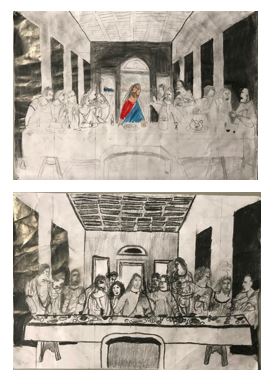 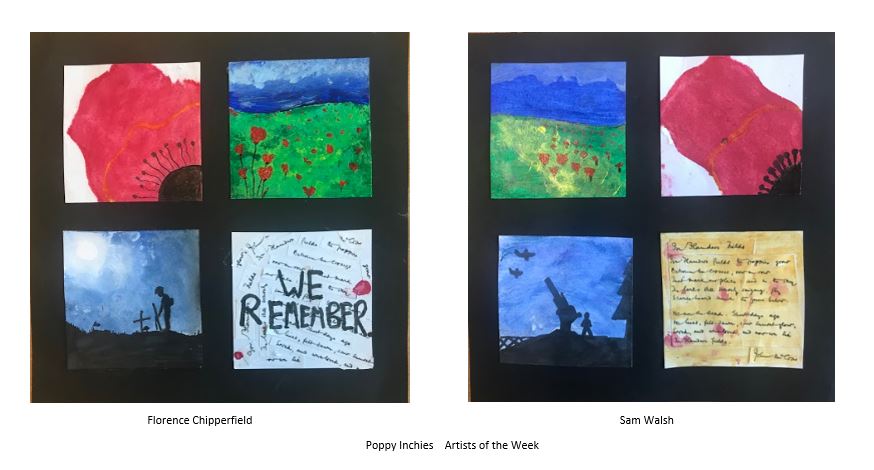 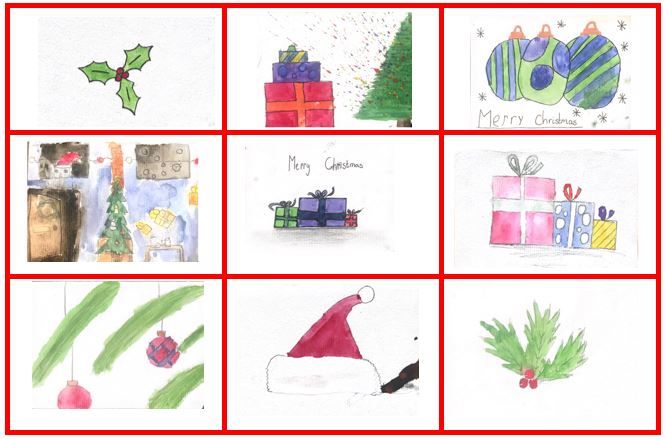 Polly Byrne’s Robin was chosen as Artist of the Week. 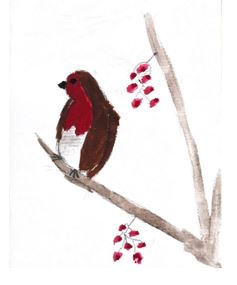 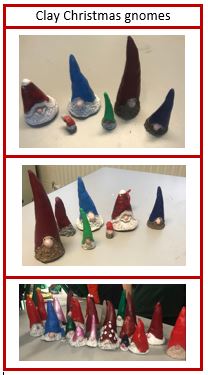 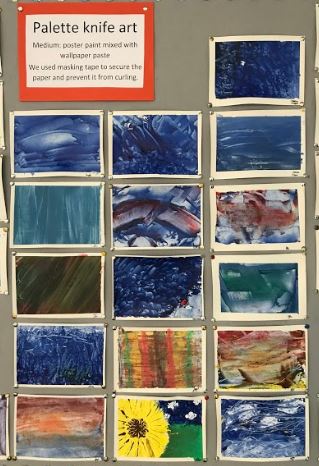 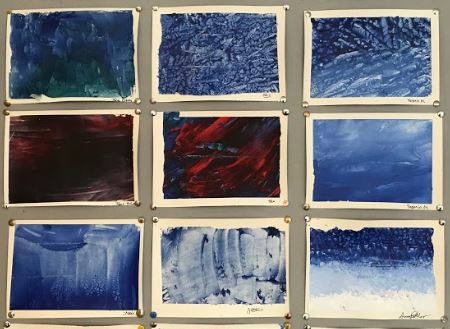 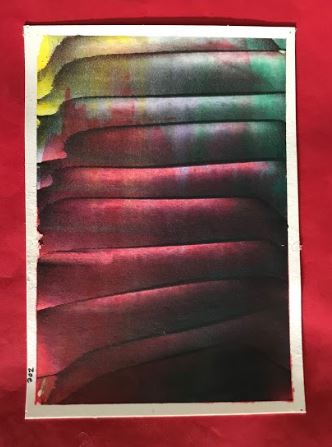 This picture made Zoe Bell ‘Artist of the Week’.

This was the first time we used gesso. First we stuck our paper to a large sheet of cardboard with masking tape, which we used almost like an easel. Then we painted the entire paper with a coat of gesso to give the paper a canvas feel. When that was dry, we painted the entire thing again, with a coat of yellow ochre acrylic paint. When that was dry, we painted our pictures based on the pictures above and we weren’t allowed to use any black paint. 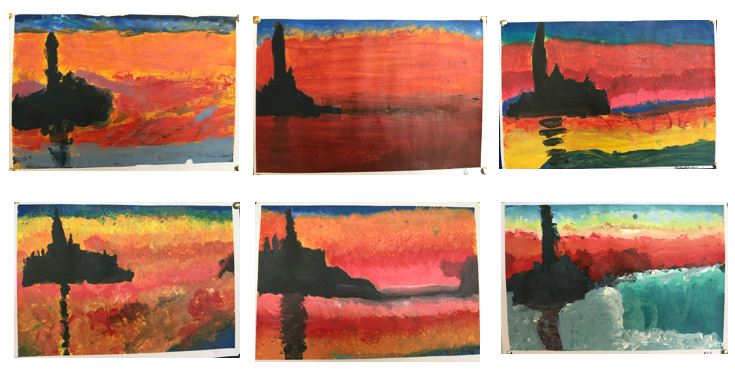 Florence Chipperfield, was chosen as Artist of the Week for this picture:

Inspired by Lewis Carroll’s Jabberwocky, which we learned by heart, we wrote our own nonsense poems. Some of us worked in pairs, some in threes and some of us opted to work on our own.

Listen to us recite them on this power-point:

Or look at them on our e-book:

We also learned Roger McGough’s All Purpose Children’s poem which we illustrated: 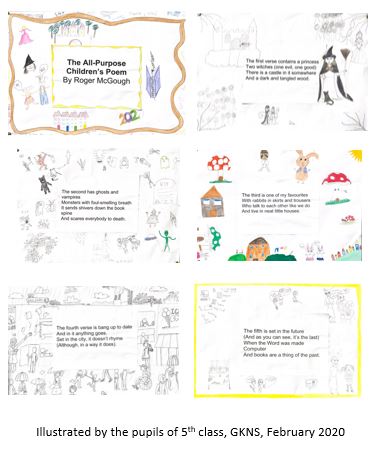 Check it out on this ebook: https://fliphtml5.com/center/flips/book.php?cid=611307#upload

During the last term we focused on explanation writing. Check out this ebook with our explanations, covering all sorts of topics, such as why we have freckles and how do cuts heal? : https://fliphtml5.com/szrxp/kxon

We wrote reviews on two of the books we studied in class, Holes by Louis Sachar and Bridge to Terabithia by Katherine Paterson. There was quite a contrast in the reviews, with one book getting overwhelmingly positive reviews and the other negative reviews. One or two people were brave enough to swim against the tide and express their different opinions.

Here is a sample of the reviews: 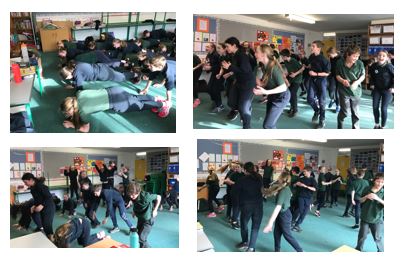 We have just completed a six week course where we learned the dangers of cigarettes, drugs and alcohol and we learned about making choices and asserting ourselves.

Here we are with our certificates: 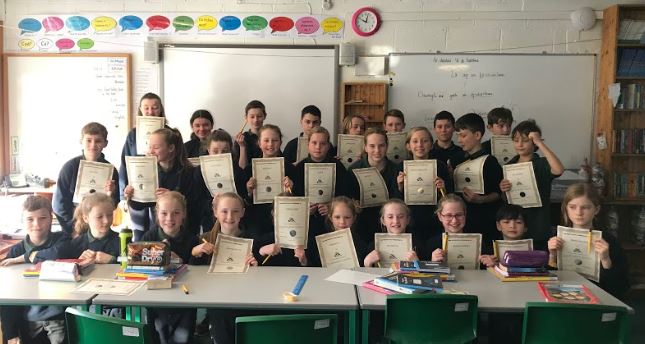 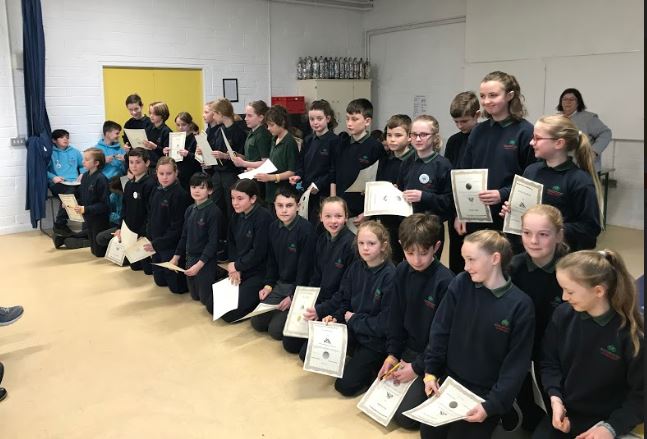 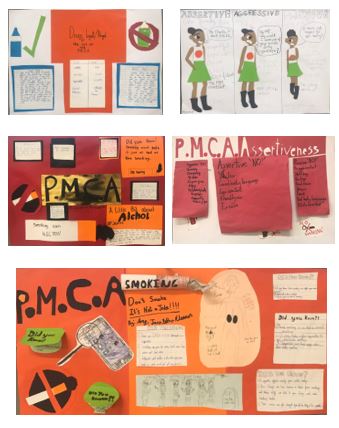 We’ve had a busy September and October in 5th class doing lots of work and having some fun along the way.

Here are some reports and a couple of photographs too.

On the 4th of October, we got a visit from Harriet, mother of Flossie the beach cleaner. Flossie is a twelve year old girl who started cleaning beaches when she was nine. This eventually turned into the group, Flossie the Beach Cleaner. It started when Flossie and her family were on holiday in a place that is not very good at recycling their plastic, and Flossie was horrified by all the plastic. Since then, Flossie, her mother and anyone who wanted to come along, have been cleaning beaches.

On the 4th October, we got visited by Flossy’s mum Harriet. She talked to us about how Flossie’s Beach Clean Up is trying to make Ireland more eco-friendly. She showed us this SUPER big piece of polystyrene and loads of plastic. She also showed us a lot of toys people just dumped! It was shocking! She also told us about this place in Indonesia where they just dump all their rubbish in the river (as well as companies like M&Ms).

Some people have this craze to try to find the oldest piece of plastic and Harriet showed us an old packet of nylon tights which must be 50 years old! It was really interesting and I learned a lot.

On the 16th October, we went to Microsoft to do the Dreamspace programme. When we got to Microsoft, we met Niamh, the lady who was going to do the Dreamspace programme with us. First, Niamh showed us the main lobby area and then we went back to the room where we were doing the Dream Space programme. We were given two tasks to complete. The first task we had to complete was using a microbit to make these little patterns pop up on the microbit. Our second task was to take a picture and put a VR picture on it.After that we were given some food. When we were leaving, we got given goody bags.I loved it so much.

Last Thursday we went on a trip to Microsoft Dreamspace. It was really fun. First, we went to the center of the ground where Niamh, our tour guide, explained some interesting facts about the building and the company. After that we went back into the Dreamspace area and had fruit pots and we watched a short video about VRs. Next we went to an area in Dreamspace with several tables and we were split into groups and everyone got a laptop and a micro-bit and did coding. Then we all got sandwiches and crisps and a glass of water. Then we were split into different groups of four and each group got a Surface Pro and we did a mixed reality thing. 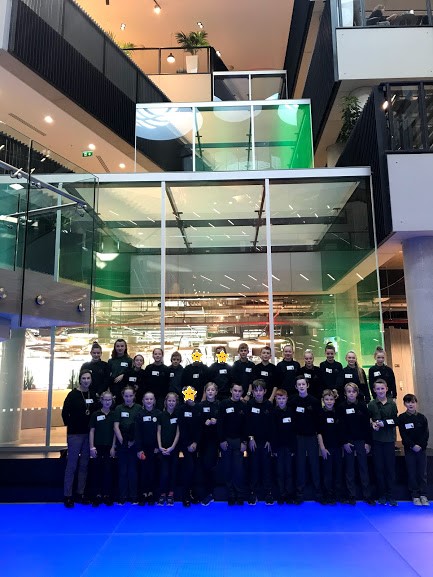 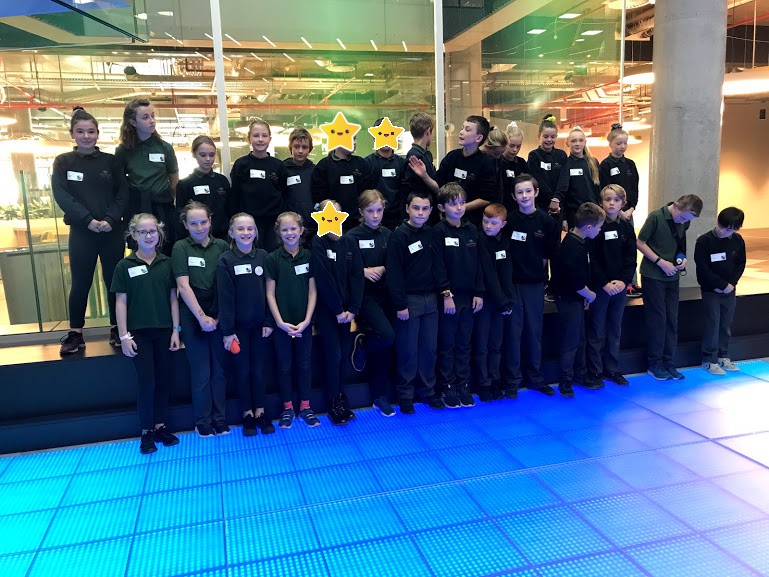 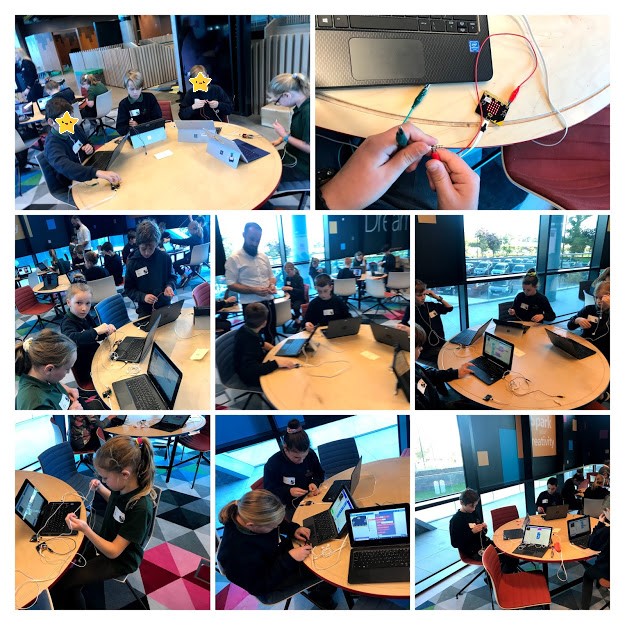 Gardaí Paul and Alva came to visit us today to tell us about Halloween and how it can be dangerous. Some of the very dangerous things are fireworks, because they can set off in your hands or can blow up in any way and can damage your hand, then blow up in your face. We saw some pictures of people’s hands.

Another dangerous thing is bonfires. Most people think you can put anything in bonfires. You cannot! You can only put wood in and stand way back.

If you see people drinking of having drugs, just step away.

Two more things: if you are carrying a mobile phone, keep it in your pocket so someone doesn’t try to steal it. If one of your friends wants to go home, walk them home. Don’t just say bye and walk off. At the end we took a picture.

I can’t wait for Halloweenand the day after, Aoife is coming with my family to Centre Parks.

We had a visit from the Gardaí today to tell us how to stay safe on Halloween. Their names were Paul and Alva. They started off by telling us to be careful with our costumes, especially floaty capes and loose hair, because people may have candles for decoration. They told us about severe burns and injuries from fireworks and showed us some pictures of nasty results of burns. They warned us to be careful of bonfires and fireworks and especially dud bangers. They said to stay away from people who looked like they had drugs or alcohol and to tell your parents of the guards if something happens. They reminded us not everybody likes Halloween, especially pets. 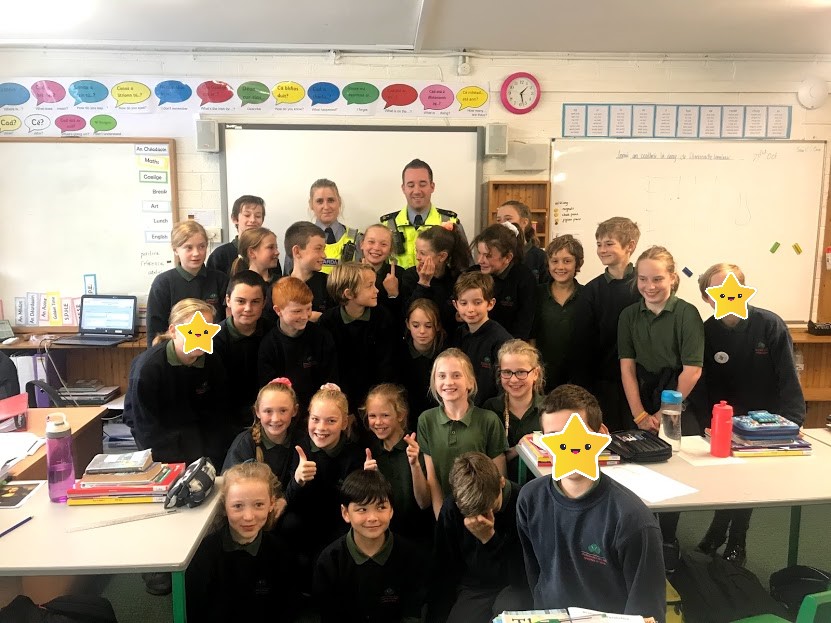 In September, we studied buildings and settlements and as part of this we each studied an unusual house somewhere in the world. Here’s a link to our ebook, Interesting Buildings around the World, https://fliphtml5.com/szrxp/qwig 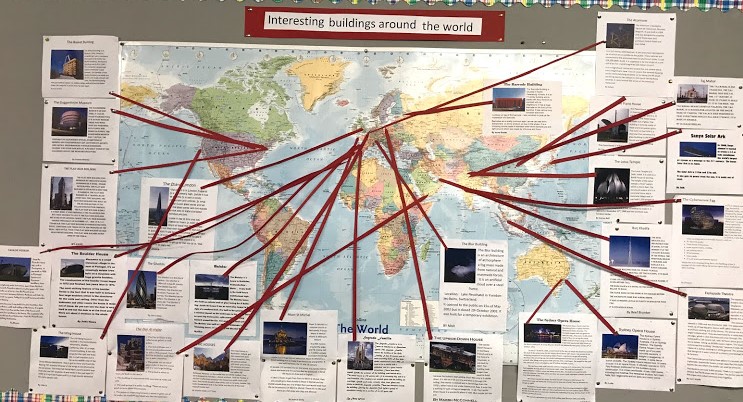 In art, we’ve been experimenting with printing. To begin with we tried foam-board printing with markers, with mixed success. The first prints worked out well, but the foam-board absorbed the marker and didn’t allow for a change of colour. 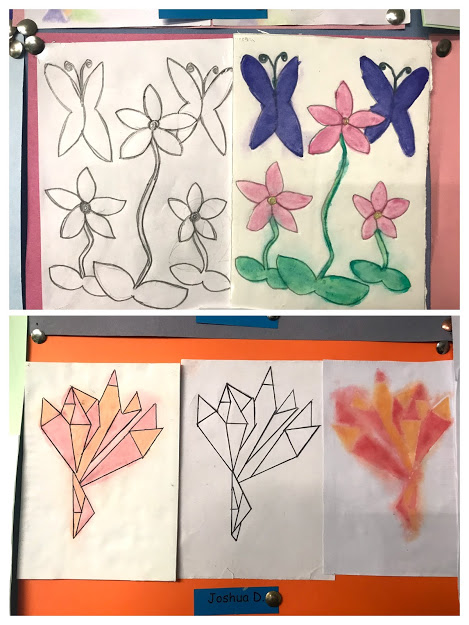 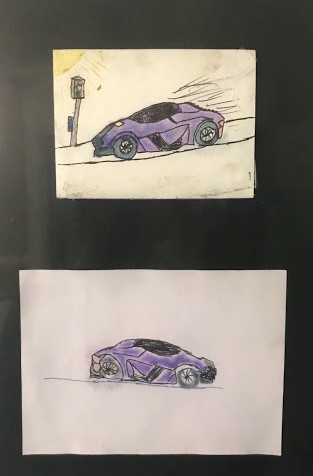 We then put our printing technique to work with printing ink and rollers. We were learning about the Maya civilisation and designed and made our own hieroglyphics. We made our own codex with them too: 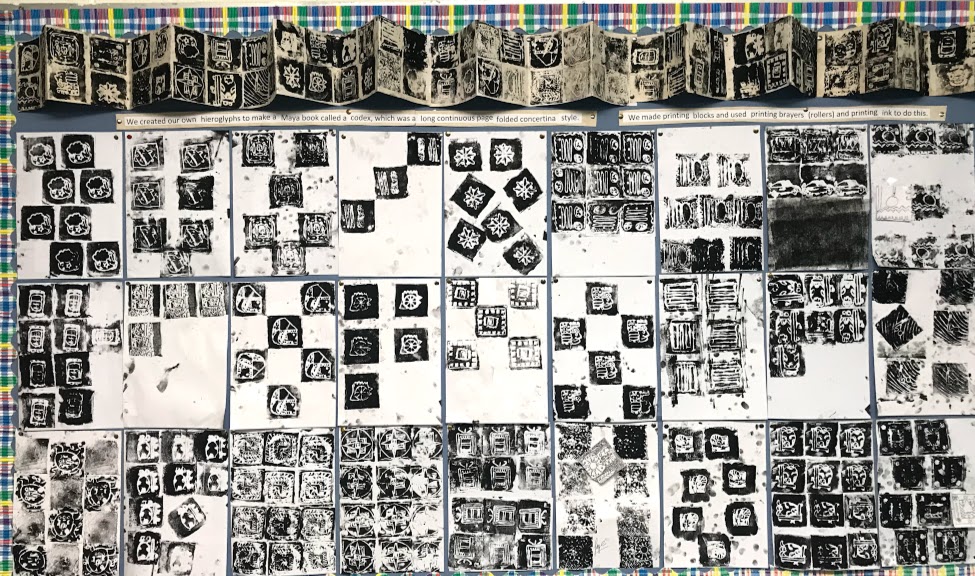 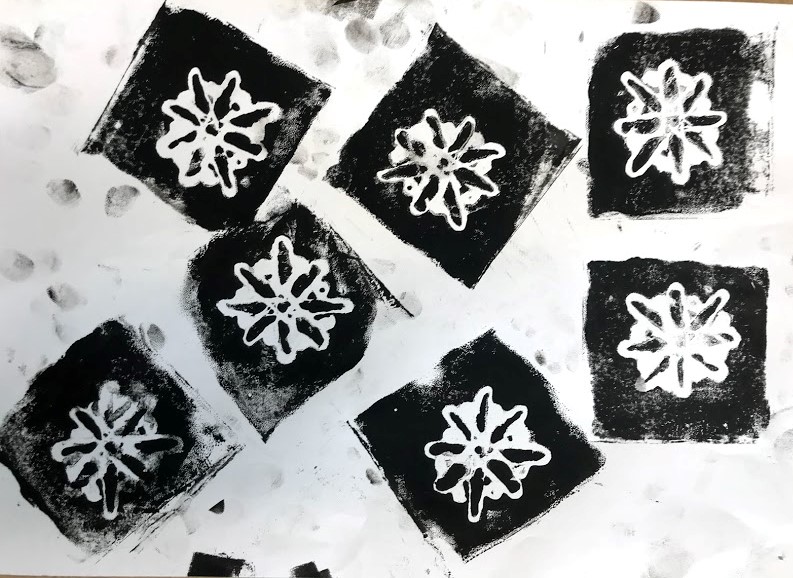 Artist of the Week

We have introduced Artist of the Week, where the children choose the piece of art they feel is the best piece done that week.

Here are the winners so far: 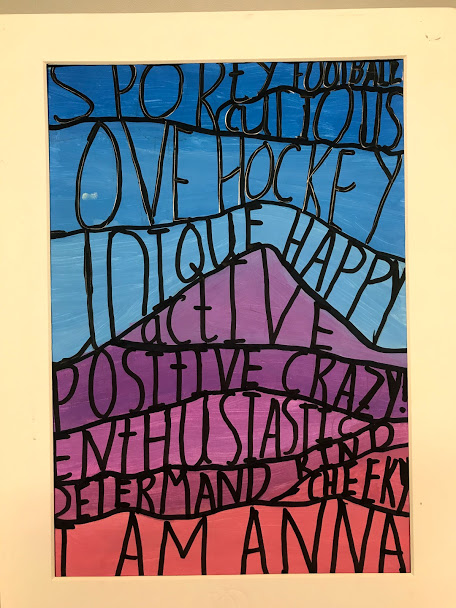 I AM ART by Anna 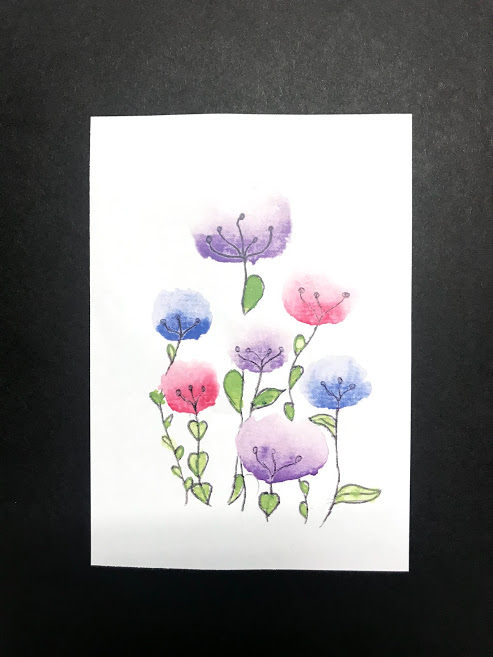 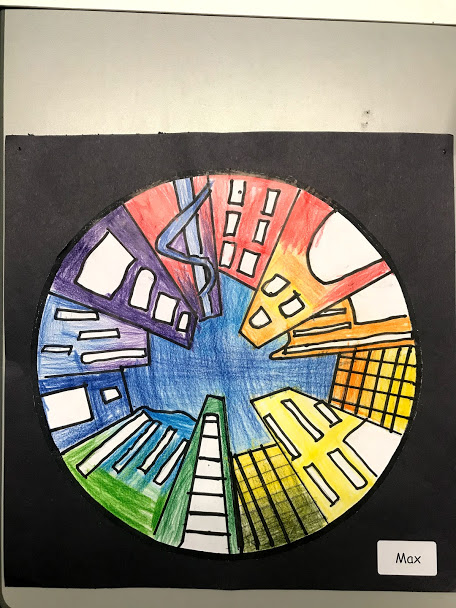 Hieroglyphic  Foam Board printing by Clodagh

GKNS
We use cookies on our website to give you the most relevant experience by remembering your preferences and repeat visits. By clicking “Accept”, you consent to the use of ALL the cookies.
Cookie settingsACCEPT
Manage consent

This website uses cookies to improve your experience while you navigate through the website. Out of these, the cookies that are categorized as necessary are stored on your browser as they are essential for the working of basic functionalities of the website. We also use third-party cookies that help us analyze and understand how you use this website. These cookies will be stored in your browser only with your consent. You also have the option to opt-out of these cookies. But opting out of some of these cookies may affect your browsing experience.
Necessary Always Enabled

Performance cookies are used to understand and analyze the key performance indexes of the website which helps in delivering a better user experience for the visitors.

Analytical cookies are used to understand how visitors interact with the website. These cookies help provide information on metrics the number of visitors, bounce rate, traffic source, etc.

Advertisement cookies are used to provide visitors with relevant ads and marketing campaigns. These cookies track visitors across websites and collect information to provide customized ads.

Other uncategorized cookies are those that are being analyzed and have not been classified into a category as yet.